We are the Evolve Skateboards North American Distribution center, we ship anywhere within the United States and Canada.

With the exception of new release pre-orders, most in-stock orders will be fulfilled within 2 business days of the order date. Please allow 1-2 days additional processing time for Custom Board Builder orders. Sorry, we are unable to expedite skateboard orders; all skateboard orders must ship FedEX/UPS ground service only.

Canadian Customers: Customers are responsible for Customs duties, taxes, and brokerage fees(collected at checkout). Sorry, we are unable to expedite skateboard orders; all orders containing a skateboard order must ship UPS Standard service only.

Mexican Customers: Due to our carriers current policies, at this time we are unable to ship orders containing a skateboards to addresses in Mexico.

International Customers: Outside of North America? See our International Distributor list for a distributor in your region, or contact our headquarters in Australia for information on placing an order: ask@evolveskateboards.com.au Really like these wheels. Smooth and able to handle large cracks in pavement without problem.

These take on any bump like a champ and will let you go faster. So glad evolve had that bc i feel as if they are always out of stock. If they are in stock get these wheels you will not be disappointed, they blow the 90s out of the water

Super excited to try these wheels out on my new board!!

T
T.M.
The evolution of the skateboard wheel continues!

Okay, so first, I've tried at least 14 different types and brands of wheels on my Evolve Carbon GTR and everybody already pretty much knows that the all-terrain wheels provide the cushiest, stickiest, and most forgiving ride. Most people also know that the smaller harder wheels from Orangatang and other manufacturers provide the longest range even though they have a rougher ride and less overall traction, but what wheel provides a middle point between these extremes? I would say it is these wheels. They are truly amazing and don't feel like a compromise at all. They are a bit pricey, but I have been drifting these around quite hard for quite a while now, and they seem to be wearing just fine without any chunking, flat spots, or noticeable coning. The slide is a bit less predictable than the Orangatangs for example, but they don't just suddenly slide out in my experience. They just have to be pushed very hard before they slide, and it's a very tight margin between the grip and the slip. The larger diameter of these wheels also makes them rollover items that may have caused concern when running smaller wheels. I just wish there was a blackout version like in my picture! I think they look a lot better without the lettering, but that's just me. 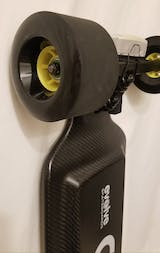